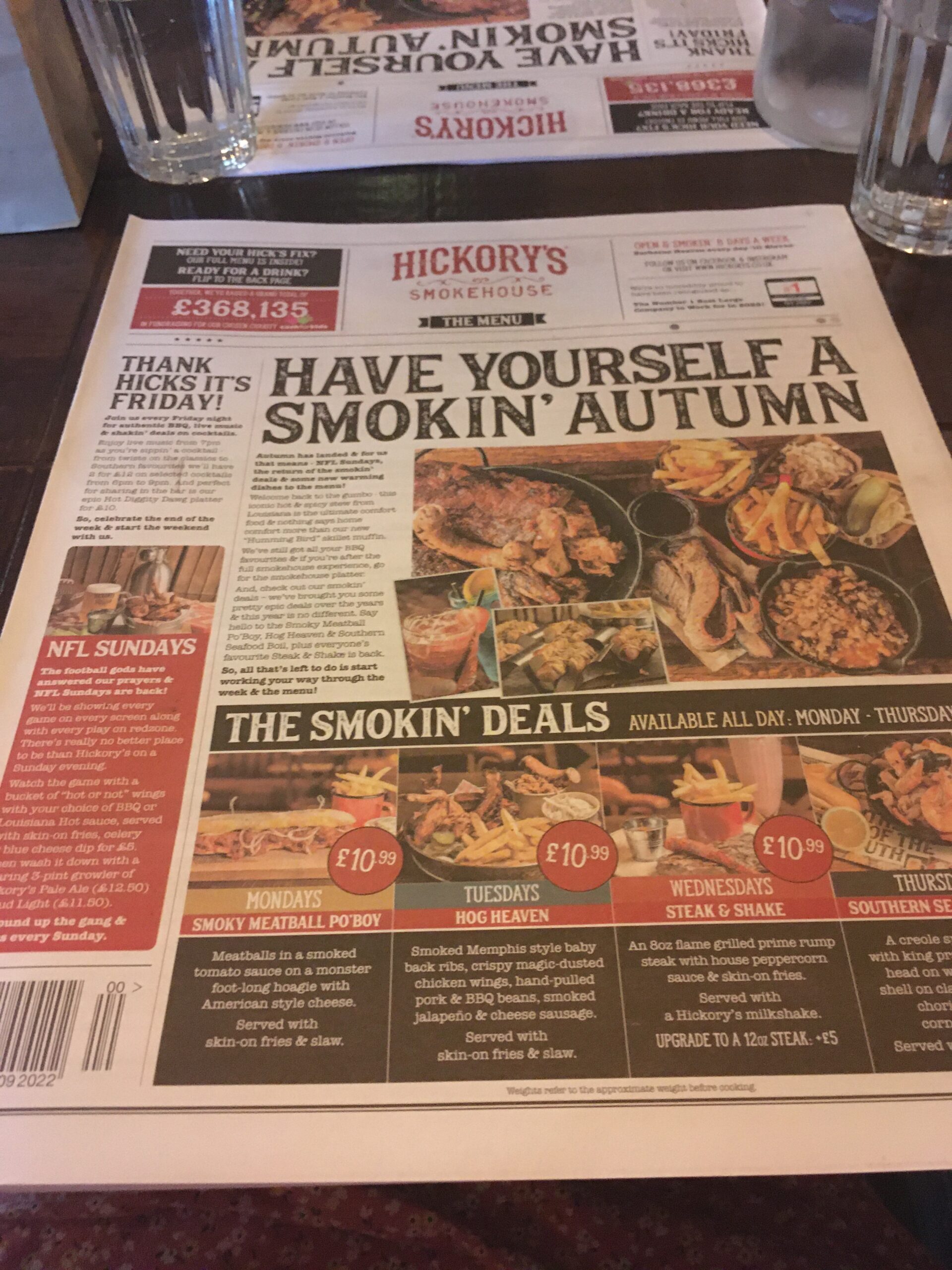 A couple of weeks ago, a photo popped up on my Facebook timeline of a friend and her family enjoying a meal at Hickory’s Smokehouse Horbury. I hadn’t heard of the restaurant before so I did a little googling. And, well, I was influenced!

So last Friday, I went along to Hickory’s with a friend. We booked a week or so in advance and didn’t have any problems with booking a table for the time we wanted. We do tend to meet up straight after work so this could have been because we chose to go relatively early. The restaurant was quite quiet on arrival, though it soon filled up! 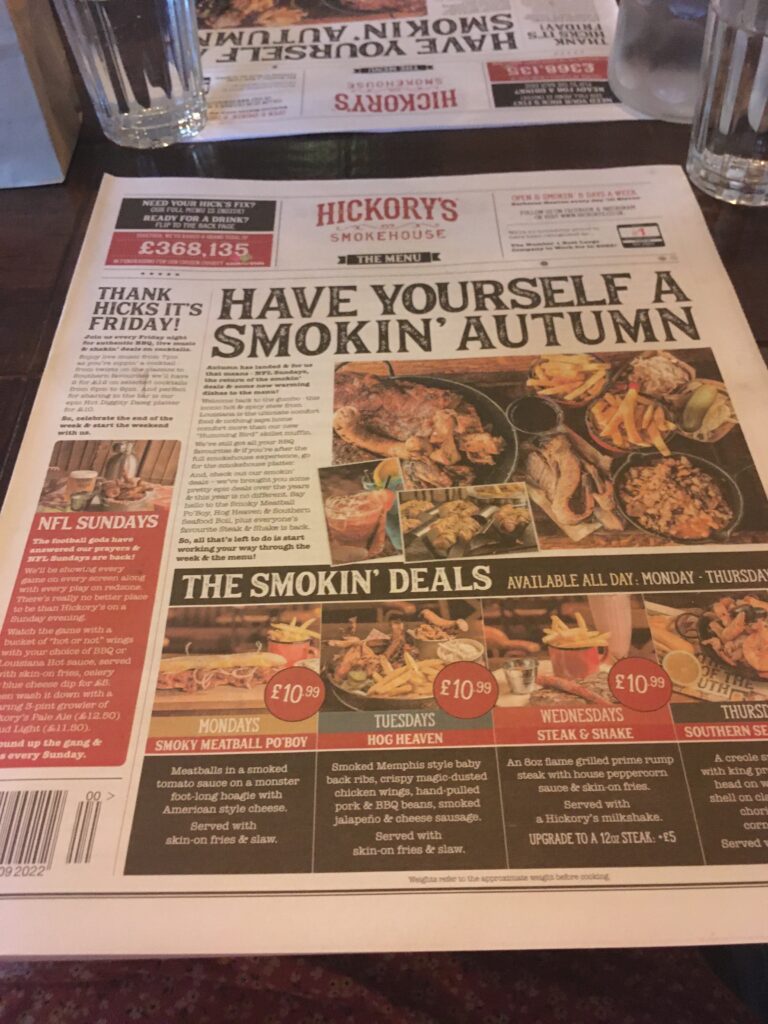 Hickory’s Smokehouse Horbury is easy to find – just a couple of minutes drive from the M1. It took me roughly 20 minutes to drive there from home, which was less than I’d thought it’d take. Visible from the main road, you have to go right around the back to access the good-sized car park. There were plenty of spaces available when I arrived and, whilst it had filled up, there were still a few spots when I left.

Walking to the main entrance, I was struck by the outside seating areas which looked a lot of fun. I noticed that blankets had been placed on the outdoor tables – a lovely touch!

Inside, I was promptly greeted and taken to the table to wait for my friend to join me. A waitress came over after a few minutes to bring some popcorn over and let me order some drinks. They were quick to arrive, as was everything else that we ordered. However, the service itself was hit and miss throughout the night. As the restaurant filled up, the service got slower and we wound up with a 20 minute wait from asking for the bill to it being brought over! 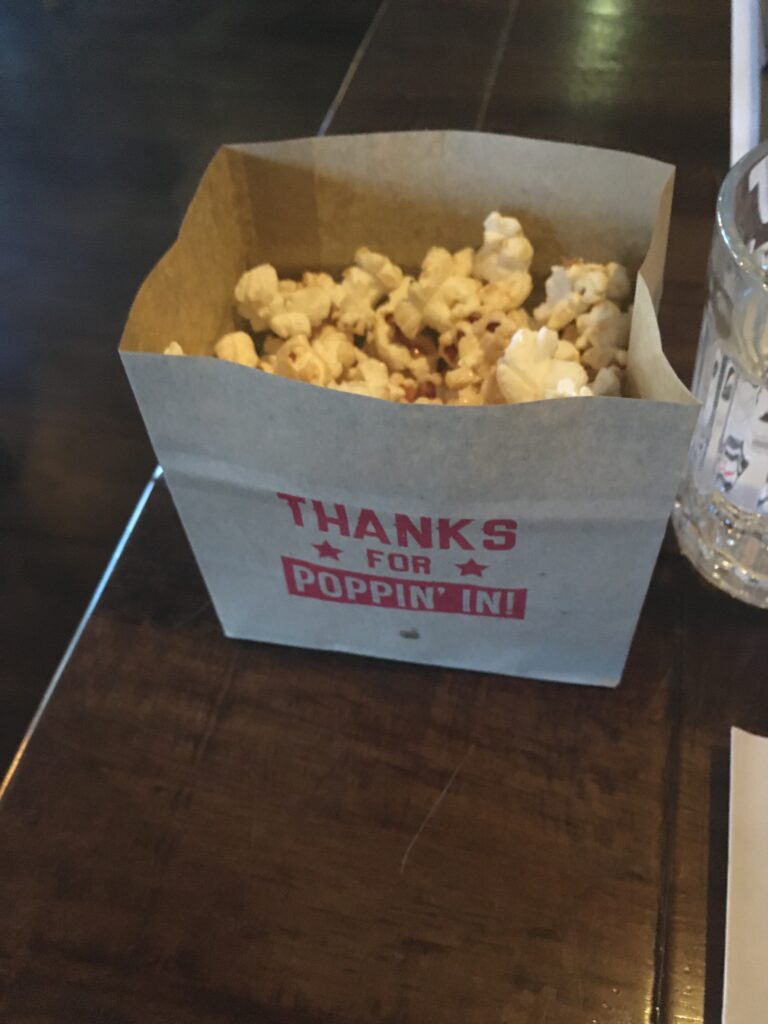 The vibe inside Hickory’s Smokehouse Horbury was exactly what you’d want from a BBQ joint. Dark wood, large booths and an open kitchen front all added to the experience. We had a table for two tucked away in a corner. It was a great place to be seated, though I did feel we were a little far from the action.

At 7pm a musician performed an acoustic set while we dined. Even though we weren’t able to see him, the sound was great where we were sat at the far end of the restaurant. It was a great, unexpected addition to our night out. No wonder it was packed! 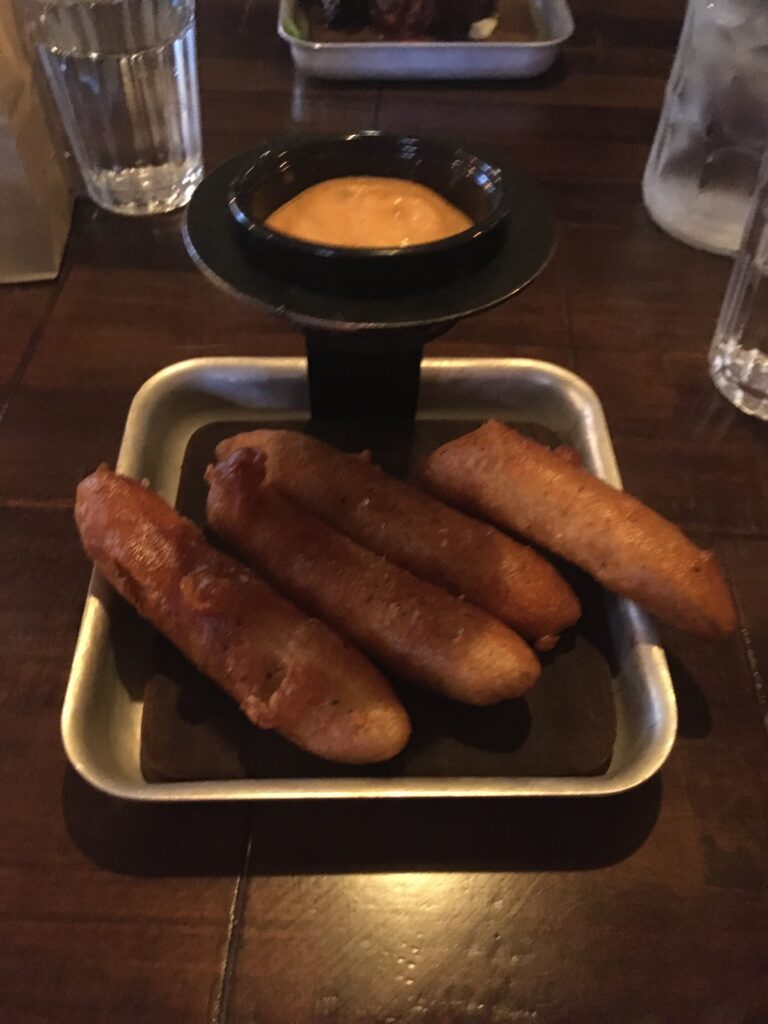 Hickory’s Smokehouse is a BBQ style restaurant. It’s not something I’d usually go out of my way to find as I’m vegetarian. But having looked at the menu online before booking, I was sure there was plenty that I’d find to eat.

To start with, I ordered the Frickles. Not a dish I’d tried before, these were fried pickles with a BBQ style dip. I wasn’t prepared for how big they’d be and started to regret my decision to order a starter as I’d already been eyeing up the dessert menu! The frickles didn’t disappoint and I even enjoyed the BBQ sauce.

Next I went with the Hickory’s Veggie Burger. Like the starter, the portion was absolutely massive! Never have I seen a bigger veggie burger before! Not only did it have a cheese smothered veggie patty in there, but also a mushroom, hash brown and the obligatory salad. This was not a burger to attempt eating with your hands! 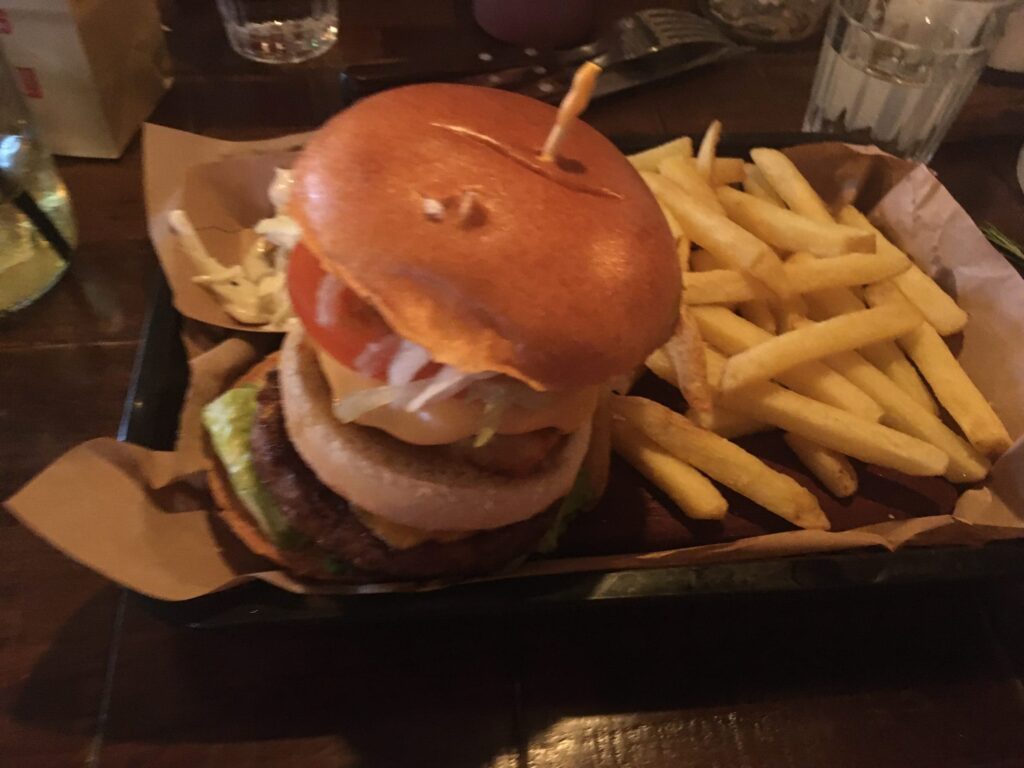 I confess, I didn’t manage to finish all the bread. (Did I mention, there was an extra bread bun in the middle of the burger?) Nor did I quite get through all the chips. But that’s because I was desperate to leave room for dessert.

Yet again, when the dessert arrived there was a generous portion. I went with the ice cream cookie sandwich, largely because I was curious to try the Fro-Co. I love custard, so I was sure I’d like the frozen version. Spoiler alert – I did! It was covered in lashings of chocolate and butterscotch sauce as well as marshmallow and honeycomb pieces. All sandwiched between two M&M cookies. 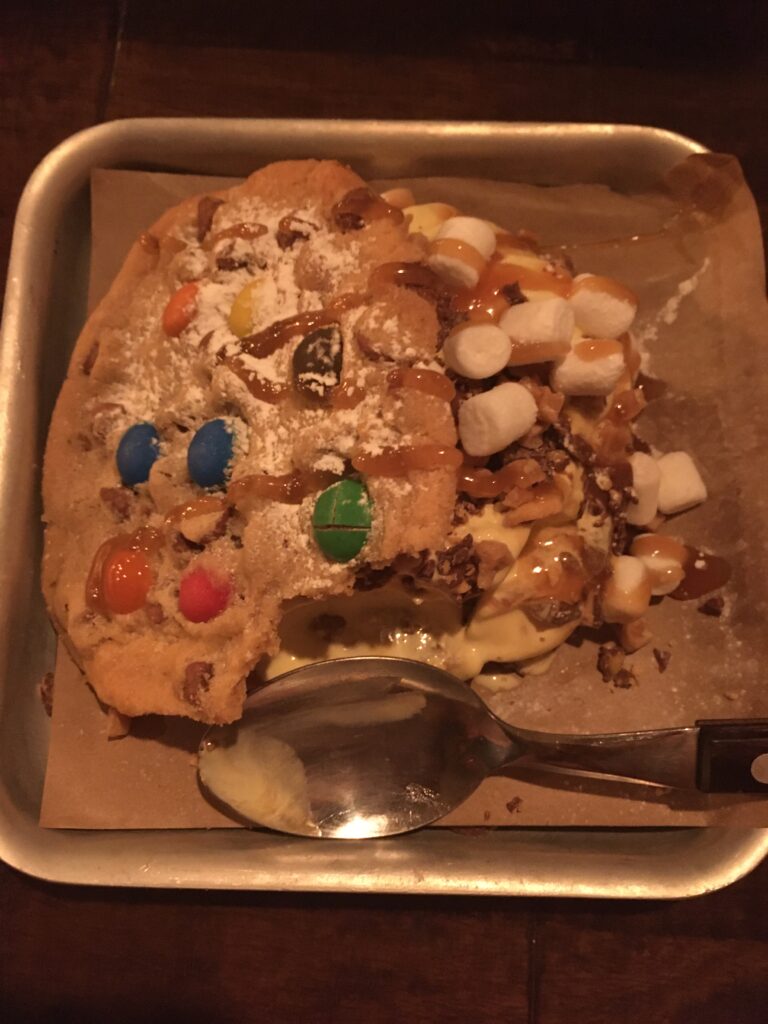 I was keen to finish the Fro-Co but ultimately, dessert over-phased me. So my husband was very happy to have one of my left over cookies. Hickory’s were really accommodating when I asked for a box to take the leftovers home in!

We absolutely loved our experience at Hickory’s Smokehouse Horbury and would definitely recommend it for a visit! It was, perhaps, a pricier restaurant than we’d usually choose but absolutely worth it. Though be warned – there’s an automatic 7.5% service charge added to the bill.

If you’re near Horbury and fancy something a bit different, Hickory’s is the place to go!