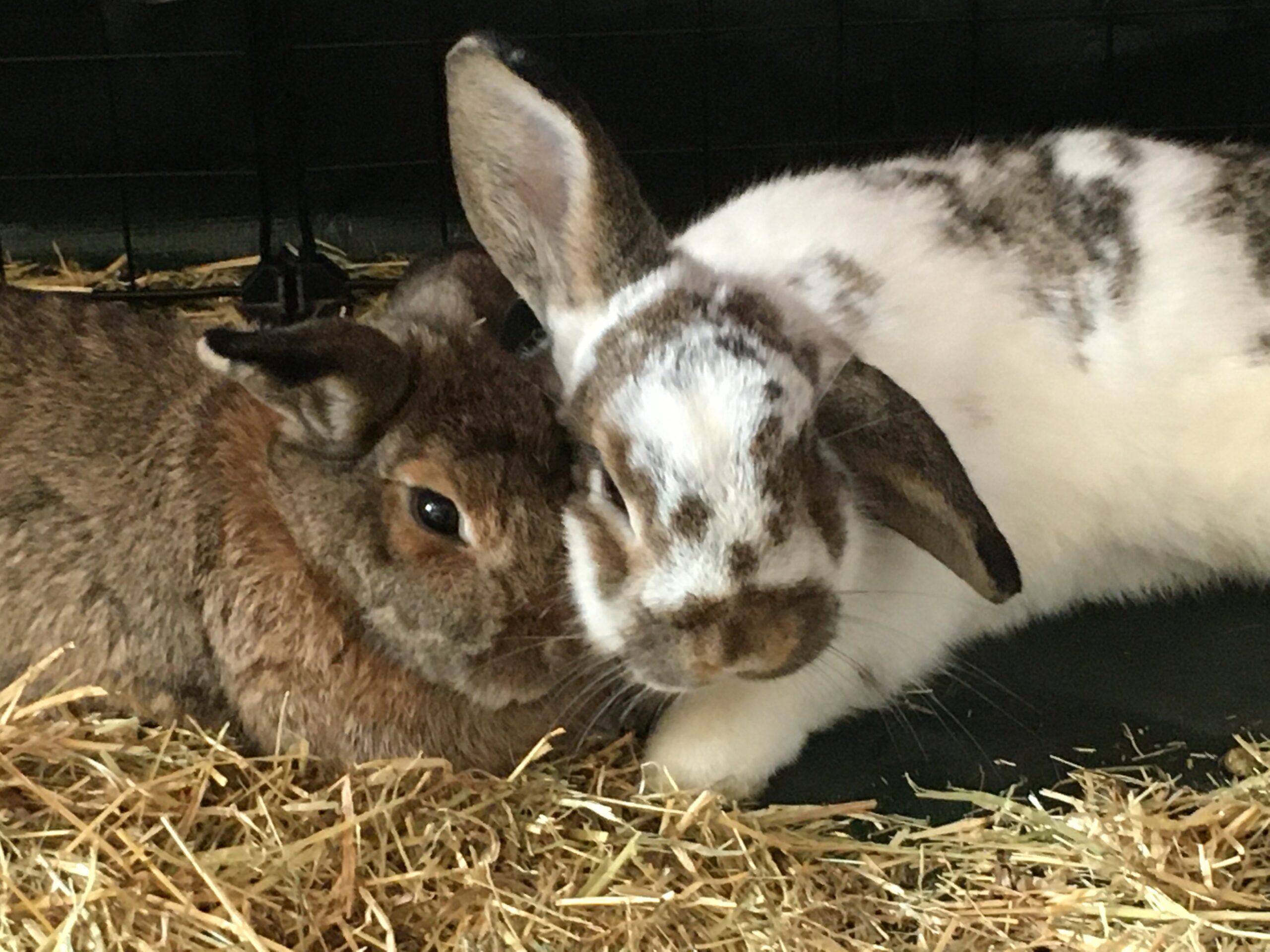 When I became a bun mum for the first time, I’ll admit I was naive. We brought our boys Walter and Winston home when they were just 8 weeks old. They still had their baby bond and I knew we’d have to go through the rabbit bonding process once they had been neutered. But just how much of a process it would be was what I wasn’t prepared for.

House rabbits had been a dream of mine for a long time. We did some research and settled on two because rabbits are happier in groups. I had started to work full time from home so would be on hand to settle them in and re-bond them post-neutering.

Walter and Winston were from the same litter so we’re used to each other from the off. They lived happily together until they were around 4 months old. Then the fighting started.

We separated the bunnies straight away and set out to get them neutered, knowing that we’d have to wait at least 8 weeks post op to bond them as adults. 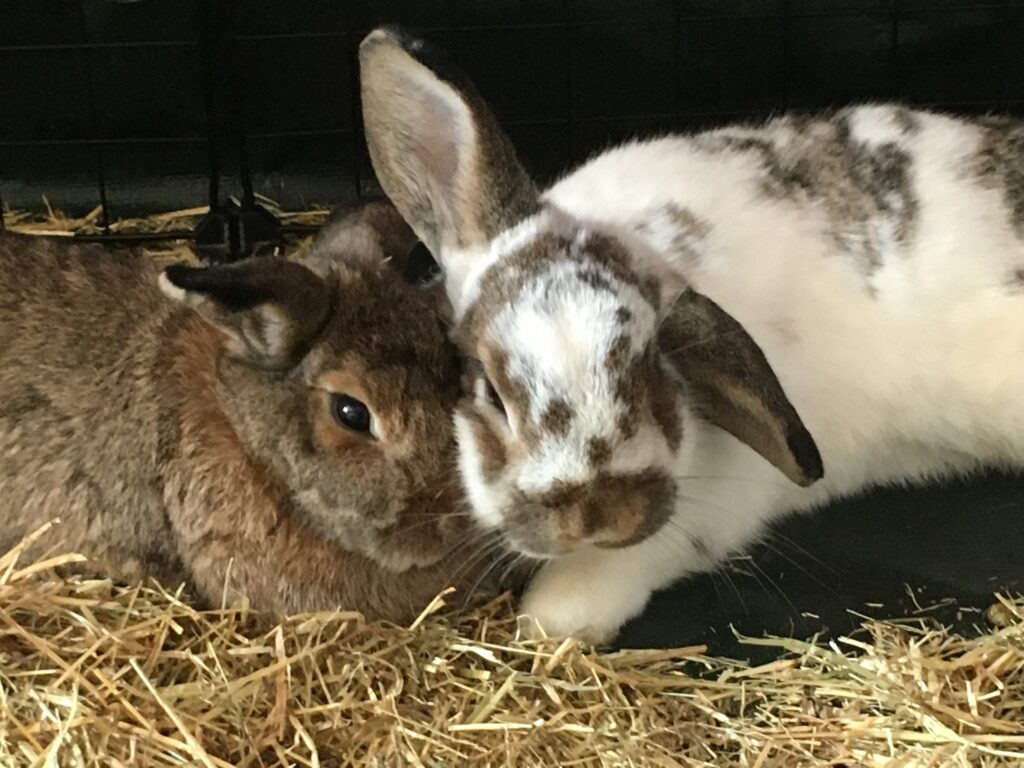 While they were recovering, I took to researching bonding methods and found lots of conflicting advice. Some advocated for stress bonding – either a car journey together or bathtub bonding. Others suggested 10 minute dates, building up in time following no bad behaviours. Or there was the third option – going whole body and doing 24/7 bonding. Which would mean sleeping near the rabbits to intervene in any cases of bad behaviour during the night.

Luckily for us, we had largely confined Walter and Winston to the kitchen. This meant that the rest of our house was neutral area to them. One thing that all my research agreed upon was that, whatever bonding method I chose, a neutral space was necessary for rabbit bonding.

Initially, I chose to bond the rabbits in the bathtub, starting with 10 minute dates and increasing the time following successful dates with no bad behaviour. At first this worked well for us. Simon and I would carry the boys up to the bathroom and place them in the tub at the same time – so that neither could claim their territory in advance of the other. But as our dates got longer, bad behaviour creeped in.

We abandoned ship a few times. Stopping and letting them carry on living side by side in the kitchen. Then trying to start the process again a few weeks later, once they’d forgotten their spats. The same kept happening.

In a bid to give Walter and Winston some positive experiences together, we embarked on a period of time getting them together for forced cuddles, before trying the bonding process again. Forced cuddles involve placing the rabbits side by side while petting their heads. This allows them to get used to each other in a positive way, allowing them to get used to each other’s scent. We used forced cuddles daily for a couple of weeks before trying to start the bonding process again.

Having had poor experiences with the bathtub, we decided to set up a small pen in the living room as a new bonding space. Starting with a space only just big enough for the two of them to lay down in, we started off with 10 minute dates again. But as the dates increased in time, so too did the bad behaviour. We just couldn’t get past 30 minutes together happily.

Each time we started a new date, the rabbit who had been the more submissive of the two during the previous date decided he was ready to be dominant. Switching it up every time they met, just lead to more spats and their dates became negative experiences. Once again, we hit the pause button on the rabbit bonding process.

At this point I was relatively sure that sending the boys to a professional rabbit bonder would be the answer. Rabbit bonders have much more experience and could start the process for us by taking Walter and Winston to a completely neutral place and focussing on starting the bond, so we were able to continue with more success once they arrived home.

However, there seems to be a huge lack of people who offer rabbit bonding in Leeds and the surrounding areas. And those that do exist have huge waiting lists. Knowing how long it takes to bond rabbits, I am not at all surprised that they’re so in demand!

While on the waiting list for a place for rabbit bonding, I decided to have one final attempt myself. Because the problem seemed to be stemming from being separated post-dates, I took the decision to go for 24/7 bonding.

We chose to set the pen up in the living room again, starting with a small area, only big enough for them to both flop comfortably. This forced them to use the same space and interact with one another.

As per previous dates, we did see some negative behaviours for the first few hours. Both Simon and I were on hand to break them up, give them both a quick pet to calm them down, and repeat as necessary. Before long, they started to display more positive signs – self grooming, cuddling and even grooming each other.

We started the process at the start of a bank holiday weekend, so that we could take shifts. Overnight, one of us stayed up on the sofa where the rabbits weren’t far away. We did this in case of any bad behaviour, not daring to sleep on the sofa. Fortunately, we didn’t see any misbehaving overnight.

In fact it wasn’t until we expanded the pen that we saw more negative behaviour. This came in the form of mounting that caused Walter, who was not happy about being mounted, to fight back. And also some head mounting. Again after a couple of hours, this subsided and we’ve seen good behaviours since.

Having expanded their area several times, we are now only seeing good behaviours. Walter and Winston are spending much of their time flopped next to each other, cuddled up together or grooming each other. We have been able to leave them overnight and are now quite happy to trust that they won’t start fighting with each other.

But the rabbit bonding process doesn’t end there. Next I aim to reintroduce a litter tray and toys. I’ll do this slowly so that they aren’t overwhelmed and to watch for any claiming of objects that might cause bad behaviour. Once they are able to get on with their accessories, I’ll move them to their forever home.

I’ll let you know how we get on in another post!